Top 5 Cool Facts About Gatlinburg TN You Should Know

1. It was named after the most hated man in town. The city wasn’t always called Gatlinburg. When it was first established, the city was called White Oak Flats. A prominent family in the area was the Ogles, and some of their descendents still live in the area today. A man named Radford Gatlin moved to White Oak Flats in the 1850s. He eventually built the town’s second general store. Gatlin opened the first and only post office in town. Since his store was popular because of the post office, people nicknamed the city Gatlinburg after Gatlin. The Ogles and Gatlin didn’t get along, and they were famous for feuding. Gatlin was eventually ran out of town, but the name Gatlinburg stuck.

2. Gatlinburg TN only has about 4,000 permanent residents.

About 12 million people visit Sevier County every year where Gatlinburg is located. You may be surprised to find out there are only about 4,000 permanent residents in Gatlinburg TN! Many people from all over the county, and even surrounding counties, work in downtown Gatlinburg to help the city run like a large city. Bonus fun fact: more fish live in Ripley’s Aquarium of the Smokies than people live in Gatlinburg!

3. The most popular entrance to the national park is through Gatlinburg. The most popular entrance to the Great Smoky Mountains National Park is the Sugarland entrance. To get there, you have to drive through Gatlinburg. The Sugarland entrance isn’t the only entrance into the national park, though. You can actually get there if you drive through Wears Valley, which is a more scenic route. There’s another entrance through Townsend Tennessee, which puts you closer to Newfound Gap and Cades Cove.

4. The first cabin built in Gatlinburg is still standing.

The first person to build a cabin in the Gatlinburg area was William Ogle. He scouted out the land and picked a place to build a new home for his family. Unfortunately, Ogle passed away before his home was finished. His wife, Martha, brought her family over and finished building their home. You can actually see their home at the Gatlinburg Welcome Center!

5. Gatlinburg wasn’t always going to be in Tennessee. 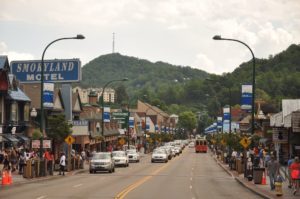 Before Tennessee was a state, there was a territory named Franklin, and Gatlinburg was a part of that territory. After the Revolutionary war, frontiersmen living in the area petitioned for Franklin to become a state. Congress voted no, and the frontiersmen decided to declare that they were a state without official recognition. John Sevier was the “president” of Franklin until he was arrested in North Carolina for treason. So then the territory became part of Tennessee!

Now you know a little bit more about Gatlinburg TN! Finding yourself missing this little country town? Look through our Gatlinburg cabin rentals and start planning your next trip! Read more
The Best Places to See Bears in Gatlinburg Read more
5 Outdoor Things to Do During Winter in Gatlinburg